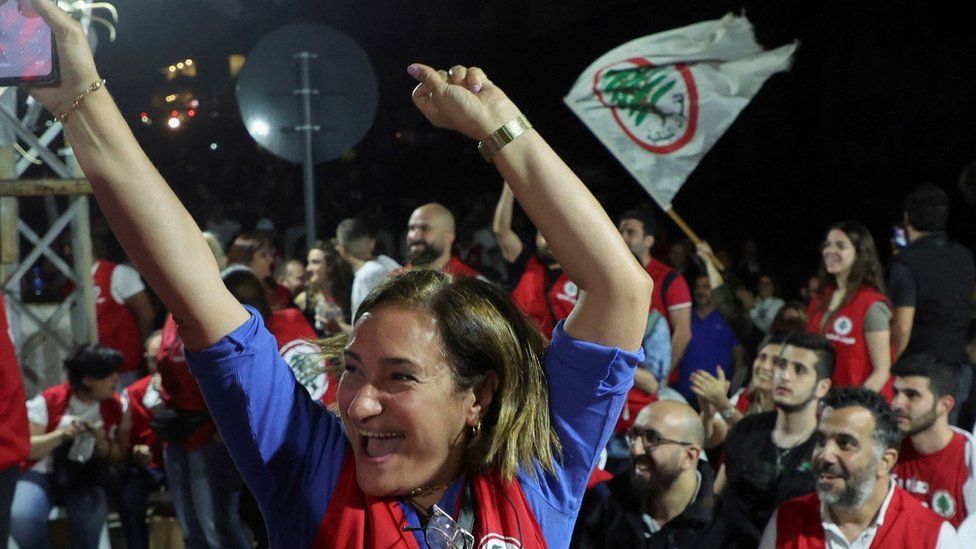 However, correspondents say a rigid power-sharing political structure means that the chance of significant political change is still low.

Sunday’s vote was the first election since a 2019 nationwide uprising against a political elite widely seen as corrupt and ineffective.

The mass protests were sparked by the start of one of the worst economic depressions the world has seen in more than 150 years. An estimated 80% of Lebanon’s population now live in poverty, and there have been severe shortages of food, fuel and medicines.

The country’s problems have been compounded by the coronavirus pandemic and a devastating explosion at Beirut’s port in 2020, which killed more than 200 people. The investigation into who was responsible has stalled repeatedly, as politicians failed to give evidence.

The Hezbollah-led bloc in parliament – including the Maronite Free Patriotic Movement (FPM) of President Michel Aoun and the Shia Amal movement of Speaker Nabih Berri – won 71 of the 128 seats in the last election in 2018.

While Hezbollah and Amal were expected to retain their seats, the preliminary results suggested the FPM and other allies had suffered losses.

The FPM said it had won 16 seats, down from 18 in the last election, while the rival Lebanese Forces (LF) said it had won at least 20, up from 15 in 2018, which would make it the biggest Christian party in the new parliament.

“We can say that the Lebanese people have punished the governing parties and have aligned with us, expressing their will for a new start in governance,” LF spokesman Marc Saad told AFP news agency.

The LF is led by Samir Geagea, who was one of the most feared warlords during the 1975-90 civil war and is a fierce critic of Hezbollah’s military power. He has said Lebanon needs a “radical change in power” to solve its problems and secure an economic rescue package from the international community.
One of the biggest shocks came in the central Aley district, where the Hezbollah-allied Druze politician Talal Arslan lost his seat to the Taqaddom party’s Marc Daou, who ran on a reform agenda.

Elias Jradi, a candidate on the “Together Towards Change” list, was meanwhile reported to have won an Orthodox Christian seat in the south – a stronghold of Hezbollah – from Assaad Hardan of the Syrian Socialist Nationalist Party.

That has been attributed partly to the decision of former Prime Minister Saad Hariri to pull his Sunni Muslim Future Movement out of the election in protest at what he called increased “Iranian influence” in Lebanon. The Future Movement had 20 seats in the outgoing parliament.

The almost 150,000 ballots cast by Lebanese expats, among whom turnout was 63%, could have an impact on the final results.