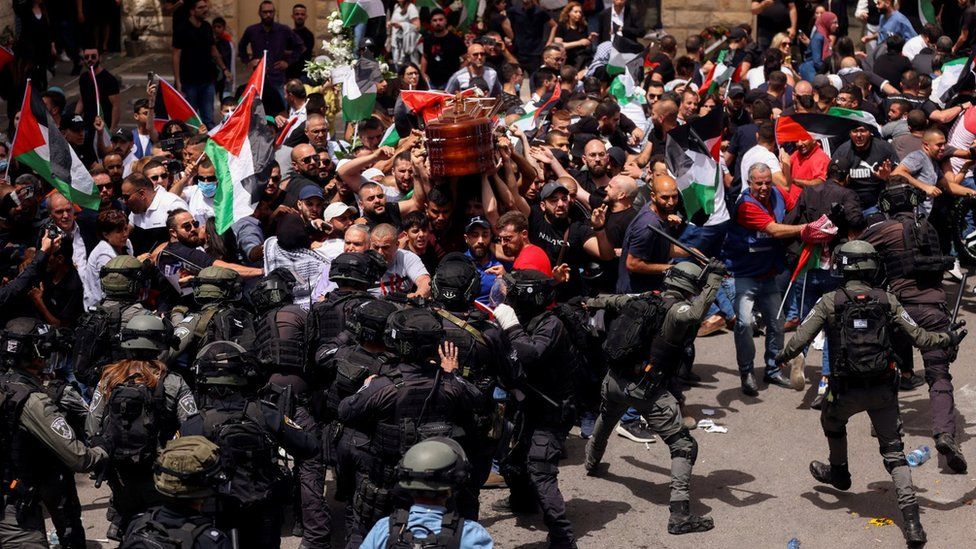 The Vatican’s representative in Jerusalem has accused Israel of “brutally violating” a decades-old agreement to uphold religious freedom.

It follows Friday’s attack by Israeli police on the funeral of Palestinian-American journalist Shireen Abu Aqla.

Officers kicked and beat pallbearers and fired stun grenades into the crowd of mourners at St Joseph Hospital.

Monsignor Tomasz Grysa, who represents the Holy See in Jerusalem, said the action was unjustified and unprovoked.

The Israeli police declined to respond to the church leaders’ statement, but has already said there will be a review into its handling of the funeral.

Abu Aqla, a veteran Al Jazeera correspondent who was a Christian, was shot dead during an Israeli army arrest raid in the occupied West Bank on Wednesday.

At a news conference at St Joseph Hospital on Monday, the leaders of 15 denominations in Jerusalem condemned what they called the “violent intrusion” of Israeli police into Abu Aqla’s funeral procession.

Monsignor Grysa said that a 1993 agreement between the Roman Catholic Church and Israel “upholds and observes the human right of freedom of religion, which in this case has been brutally violated”.

Archbishop Pierbattista Pizzaballa, the top Roman Catholic cleric in the Holy Land, said: “The Israel Police’s invasion and disproportionate use of force – attacking mourners, striking them with batons, using smoke grenades, shooting rubber bullets, frightening the hospital patients – is a severe violation of international norms and regulations, including the fundamental human right of freedom of religion.”

St Joseph Hospital’s director, Jamil Koussa, said it was now clear the target of police violence was the coffin itself, showing video of the beatings and new CCTV images of the hospital building being stormed by police, which he described as an attempt to “horrify people in the building”.

The East Jerusalem hospital is famous for its maternity ward and known for its care for Muslim, Jewish and Christian families alike. The staff call it a “place of healing”. But on Friday they were treating wounds among their own medical staff.

Many doctors and nurses had come outside to pay their respects to Abu Aqla when the Israeli forces surged into the compound.

Dr Mohammed Hmeidat, a doctor in the neo-natal intensive care unit, showed the BBC burns he suffered from a stun grenade.

“One of them was very close to my feet, and exploded. After that we hurried to the emergency department and also [the police] followed us to the emergency department,” he said.
Monsignor Tomasz Grysa (L), St Joseph Hospital director Jamil Moussa (2nd L), Latin Patriarch Archbishop Pierbattista Pizzaballa (2nd R), and Greek Orthodox Patriarch Theophilos III (R) speak at a press conference in Jerusalem on 16 May 2022