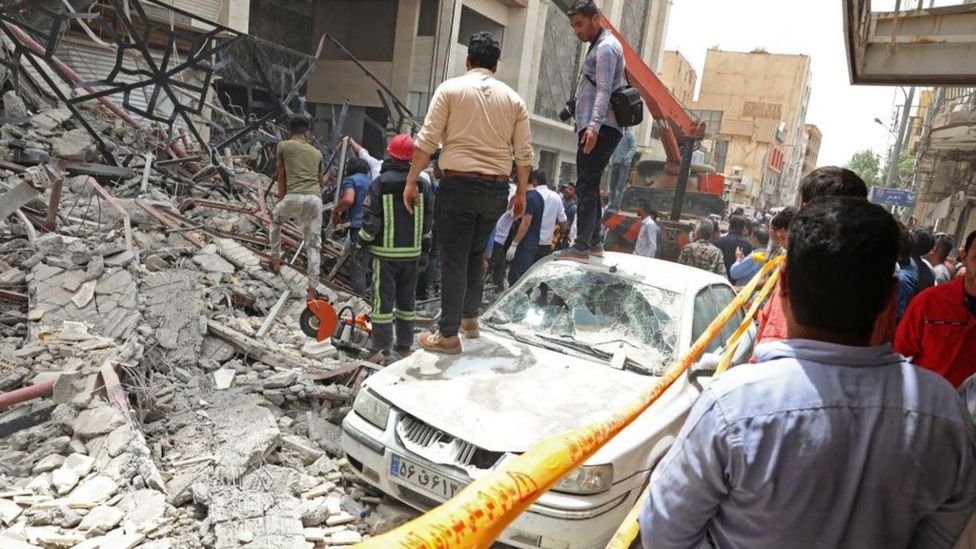 The number of people killed when an unfinished building collapsed in south-west Iran has risen to 26, state media say.

Dozens more were injured when the 10-storey Metropol office block in Abadan crashed to the ground on Monday.

Pictures showed that concrete floors and steel beams had fallen on to the street below, crushing several cars.

A search and rescue operation is continuing, and the cause of the collapse is being investigated.

At least 10 people are reported to have been arrested, including the building contractor, the mayor and two former mayors.

Hundreds of angry people, many banging drums and hitting cymbals, took to the streets in Abadan on Thursday night and Friday morning, in protest.

State news agency Irna reported that the building was located on Abadan’s busiest commercial street, and that its lower floors had been open for a few days while construction work continued above.

“I thought it was an earthquake at first,” Ahmad, a shop owner, told the Associated Press.

The Iranian Red Crescent said 23 rescue teams from Abadan and neighbouring cities rushed to the scene along with more than a dozen ambulances.

Iran’s Mehr news agency said most of those who were trapped had been shopping on the ground floor of one of the finished parts of the building.