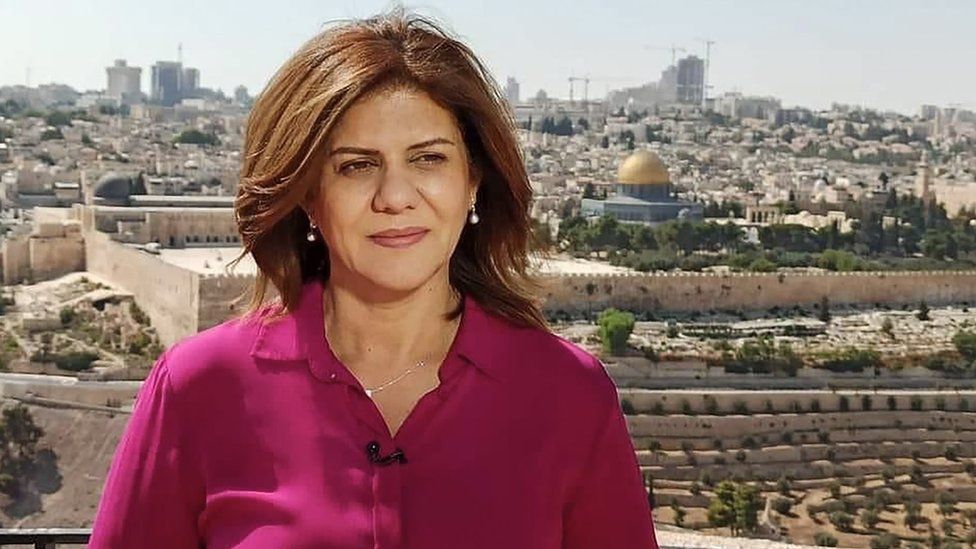 The Qatar-based network said Shireen Abu Aqla was shot “deliberately” and “in cold blood” by Israeli troops in Jenin. Her producer was also wounded.

Israel’s prime minister said it was “likely” they were shot by Palestinian gunmen during an exchange of fire.

But his military chief said it was not yet able to determine what happened.

The Palestinian president said he held the Israeli government fully responsible for what he described as a “crime of execution”.

Early on Wednesday morning she went to the Jenin refugee camp to report on a raid by Israeli soldiers and security forces, which the Israeli military said was conducted to apprehend “terrorist suspects”.

“During the activity, tens of Palestinian gunmen fired at and hurled explosive devices toward the soldiers. The soldiers responded with fire toward the gunmen and hits were identified,” a military statement said.

The Palestinian health ministry said Abu Aqla was hit in the head by a live bullet during the raid. She was taken to hospital in a critical condition and later pronounced dead.

Another Palestinian journalist, Al Jazeera producer Ali Samoudi, was shot in the back and was in a stable condition in hospital, the health ministry added.

“We were going to film the Israeli army operation and suddenly they shot us without asking us to leave or stop filming,” Al Jazeera cited Mr Samoudi as saying. “The first bullet hit me and the second bullet hit Shireen.

“There was no Palestinian military resistance at all at the scene,” he added.

Video of the shooting showed Abu Aqla was wearing a blue flak jacket clearly marked with the word “press”, as well as a helmet.

Shireen’s body has been carried through the streets of Jenin, draped in a Palestinian flag and covered with her press flak jacket. Reporters and photographers packed in around the procession – having to cover the death of one of their own.

Shireen was a well loved reporter, one of the region’s most experienced; always a familiar face at the many big news events that break here. A generation of Palestinians grew up seeing her on their TV screens, one of the best known women reporters covering the conflict.

In a tight-knit press corps, there is shock and disbelief. One colleague posted what he said was the last picture of her with them, putting on her flak jacket five minutes before her death. Another said of Shireen: “She saw death so many times during her coverage. You taught us how to do this dangerous work. You just broke our hearts.”
Line

The network called on the international community to hold the Israeli government and military accountable for the “intentional targeting and killing” of a journalist.

Qatar – which funds Al Jazeera – said it considered the killing a “heinous crime and a flagrant violation of international humanitarian law and a blatant infringement on freedom of media and expression”.

Palestinian Authority President Mahmoud Abbas condemned the shooting of Abu Aqla and Samoudi and alleged that it was “part of the occupation’s policy of targeting journalists to obscure the truth and commit crimes silently”.
A Palestinian journalist receives treatment in hospital after being shot during an Israeli raid in Jenin (11 May 2022)