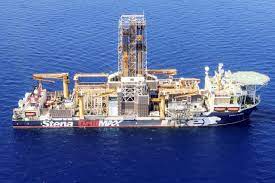 Israel is prepared to defend the Karish gas reservoir and rig, which is entirely in Israeli territory, Defense Minister Benny Gantz, Foreign Minister Yair Lapid and Energy Minister Karin Elharrar warned on Wednesday, days after Lebanon threatened Israel over it.

“The State of Israel prioritizes the protection of its strategic assets, and is prepared to defend them and the security of its infrastructure, all in accordance with its rights,” the statement reads.

The ministers specified that Karish is an Israeli strategic asset “intended to extract the energy resources and natural gas in the State of Israel’s Economic Zone and to advance Israel’s green economy.”

“With its anchoring, the rig is located in Israeli territory, several kilometers south of the area over which negotiations are being conducted between the State of Israel and the Republic of Lebanon, mediated by the United States,” they added. “The rig will not pump gas from the disputed territory.”

Energean hooked up a production ship to the Karish gas field, about 80 km. (50 miles) west of Haifa on Sunday.

Lebanese President Michel Aoun claimed that the vessel entered “the disputed maritime area with Israel… [and] any action or activity in the disputed area represents a provocation and an aggressive action.”

The Karish reservoir is south of a triangular area of the Mediterranean Sea that has been subject to a dispute between Israel and Lebanon, starting at the countries’ land border, which would make up about 2% of Israel’s economic waters. Israel and Lebanon submitted maps with their claims to the UN in 2011. In late 2020, the countries entered negotiations on the disputed area, indirectly because the Lebanese government refused to hold direct talks with Israel.

Lebanon sharply increased its demands after four rounds of US-mediated talks, almost tripling the disputed area from 869 sq.-km. to 2,300 sq.-km., to include the northern end of the Karish natural gas field, but never submitted its proposal to the UN, making Lebanon’s demand unofficial in Israel’s view.

The Israeli ministers called on Lebanon “to accelerate negotiations on the maritime border.

“Locating gas-based energy sources can greatly assist Lebanon’s economy and its citizens, and it is in the interest of the Republic of Lebanon to advance the dialogue on this matter. We hope that this will occur,” they stated.

US Special Envoy for International Energy Affairs Amos Hochstein is set to visit Beirut next week to discuss the maritime border dispute, Lebanese Parliament Speaker Nabih Berri said on Tuesday, according to local media, though the State Department declined to confirm the report.

Energean said on Monday that it plans to “immediately commence hook-up and commissioning operations” at Karish, and start to deliver gas from the reservoir in the third quarter of this year.

The progress on Karish comes as Israel has been negotiating with the European Union to export gas to Europe via Egypt, following sanctions on Russia over its war against Ukraine. Israel has been preparing to double its export capacity in the coming years.