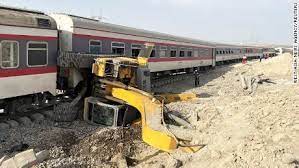 A train derailed 50 kilometers outside the city of Tabas in Iran early Wednesday, killing at least 18 and injuring 86 people, Iranian media reported. Authorities have not yet finalized the number of casualties.

The crash is currently under investigation. However, it appears that the derailment was caused by a collision with an excavator, according to Iranian media.

“According to initial information, train collided with an excavator and derailed,” Iranian railway official Mir Hassan Mousavi said in an interview with the semi-official ISNA news outlet.

The official claimed that the crash occurred at 5:30 a.m. local time.

The fatalities are being examined by forensic teams in order to identify the bodies, Iran’s Mehr News Agency reported.

Ambulances took the injured victims to the Tabas Hospital, where specialized teams of surgeons, neurosurgeons and orthopedists are present, according to Iran’s Mehr News Agency.

Jafar Miadfar, head of Iran’s National Medical Emergency Organisation, said on TV that so far 18 of the dead passengers had been identfied. All but six of the injured had been released from hospital, he said.